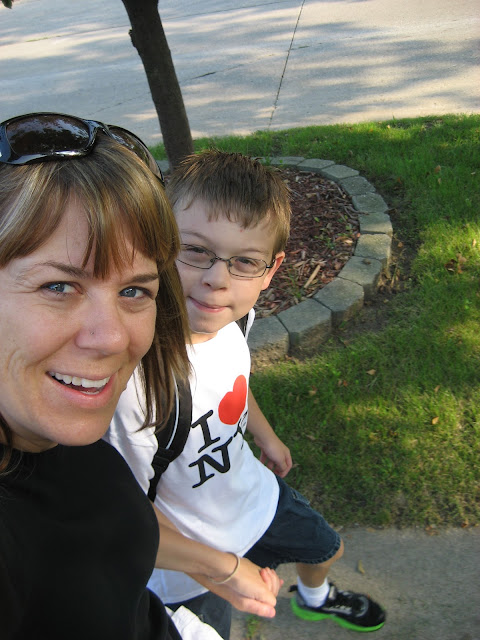 This morning after my iPhone alarm went off, I previewed my mail, skimmed new tweets and reluctantly looked at my news feed on Facebook to see what was going on in the world.  7 minutes later, I canceled the snooze and made myself a promise - I would leave the iPhone and computer alone until I got the boys to school.  It always seems like watching YouTube over breakfast or playing a quick game of Angry Birds before putting on shoes makes us late.  And I hate running late.  And we've been running late a lot lately.

I came downstairs to find Owen watching YouTube already.  It was early,  though, and I poured him a bowl of cereal.  Told him he could keep watching as long as he was EATING his breakfast.  The boy often gets so focused on the video, he forgets there are cereal bits getting soggy right in front of him.  Who can blame him?  That's one compelling round of Lego guys blowing each other up into stop-motion nonsense bits.

My phone squeaks with a new mail.  Irresistable.  Let's just peek.  Oooo, one of my items sold on Amazon!  But why is the credited amount for a $15 Wii game $30?  Expedited shipping!  The buyer wants the game right away.  Hmmmm... I wonder which shipping company I should use.  USPS?  FedEx?  Does Jason have a nice puffy envelope, or can I find one here?  I wonder where the buyer is?  If they're nearby, maybe I could get away with sending Priority Mail.  Need to login on the computer to see where the buyer is.  But the YouTube video drones on and, well, the boys seems to be eating his cereal.

At 8:28am, I announce that after THIS video, we'll turn off the You Tube and put on shoes to leave for school.  I like to be in the car at 8:42.   At 8:32 I get my chance to peek at where the buyer of the Wii game is.  Michigan, hmmmm.  "Get your shoes on, boys!"  I sign off on one last agenda and make sure library books are stowed in the correct backpacks.  I go fetch the sold Wii game off the shelf and tell Owen that he sold it.  He eagerly begins mentally spending the money.  The gmail video chat ring starts.  I think to myself, "So much for ignoring my communications devices during the morning rush."  But it's only 8:34, we've got just a couple minutes to hear the happy birthday wish and giggle at Sabin's sweet voice.  "Finnegan, get your shoes on!"

The boys arrived at school with 5 minutes to get in there, put things away and be seated.  This is typical.  We don't get tardies.  But wouldn't a few more minutes make everything better?  I bid them farewell with my usual words of wisdom.  "Make it a great day!"  "Make good choices."  "I'll see you after school."  "I love you!"  When they don't respond, I put on my little voice and say, "Have a great day Mom, we love you, too!"  They grin and roll their eyes at me and tumble out of the car.  Owen has some sort of grudge against Finn as they run to the door.  He starts swinging his backpack in circles that hit Finn in the back.  I roll down the window and say, "Owen, I can see you right now!  Santa Claus is watching you, too"  Sheesh.  I drive away, my heart swelling over two crazy, rowdy boys I had no idea I could love so much.

Owen is in 3rd grade.  He could be in 4th grade at 9 1/2 years old, but I held him back.  I sent him to Alternative Kindergarten when he was old enough for Kindergarten.  My thinking?  He's emotionally immature.  Still sucking his thumb.  Stuttering.  Still taking afternoon naps.  He can't handle all-day school.  Academically?  He was ready.  He's always been in the top tier of students in his class.  Reading at a higher level than others.  Performing complex math functions that leave his dad and I scratching our heads.

This year, he's not performing in the top tier.  He's in the middle reading group.  And it's taking him forever to complete reading comprehension tests.  And he sat for 30 minutes twirling a pencil one day while he was supposed to be doing a speed math sheet.  His teacher told us these stories and others at our conference two nights ago.  She was describing the boy I know.  She said quietly and calmly that he's the most unfocused child she's ever had in the 3rd grade. She's been teaching for 17 years.  She said she's not a doctor and can't diagnose A.D.D.  But she then gave us a folder full of teacher assessments of Owen.  All aimed at illustrating for a doctor, a child who should have some medication to help him focus.

I did not burst into tears.  Because none of this is a surprise to me.  This is the Owen I know.  Teacher described other kids who went on medication and magically turned things around.  She pointed out that 4th grade will be harder.  And 5th grade, harder yet.  And she also said that Owen is even smarter than other kids she's seen with this problem.  Was she pouring syrupy sweetness on a bitter situation by saying that?  Who knows?

I let the whole thing sink in for a day.  I sat at the park yesterday and Googled A.D.D. on my iPhone.  A skimmed again.  Seems they put A.D.H.D labels on kids with just the attention deficit thing.  I will say, though, that Owen's problem doesn't seem to be hyperactivity.  In fact, I'd consider him to be slow-moving and a bit lazy.  But they did say that A.D.D. kids often seemed "in a fog."

I often ask Owen to join me on my planet.  He understands what I mean.  When he's sitting there with YouTube on over his breakfast, he's very far away.  I can ask, "Do you want more cereal?" in audible tones and he won't even hear me.  This is a kid who can't focus?  No.  This is a kind who doesn't wanna focus on the things we ask him to focus on.  He doesn't wanna focus on 3rd grade.  But he does want to please us.

And speaking of living in a fog.  His mother is making a smashing success of that.  I didn't want to focus on 3rd grade, either.  I don't wanna focus on making them do their spelling words or math flashcards.  The A.D.D. article I skimmed on my phone (I didn't wanna read or focus on too many of the details, just ones that I found interesting) told me that folks with A.D.D. often are disorganized and cluttered.  Um, hello!  We just cleared the table last night for a card game with the boys.  And on the table now?  The playing cards, the worksheets I found in the boys' bags, my grocery list, a nail clipper, that Wii game I need to ship and an address label.  My breakfast tray & milk glass and a pencil.  My laptop that I'm typing on right now.  And Owen's toy machine gun.  Clutter Queen.

So do I need to medicate the boy?  My own experience with medications tells me that I should avoid that at all costs.  It's my own fault that the boy can't focus.  I never ask him to focus at home.  I allow YouTube over cereal.  I forget to practice his spelling words because I'm too busy searching for something on eBay.  Or texting Maria.  Or reading useless crap on Facebook.  I'm showing him exactly how to barely function with Attention Deficit Disorder.

I have candid discussions about things with my boys, who are 8 and 9, about things that make other parents squeamish.  We talk about sex and drugs.  I ask them to not do drugs.  And I make them watch the news with me every night at 5:30.  During the news, there are ads and more ads for drugs.  Drugs make little annoying symptoms go away.  Owen thinks he needs a heart medication for the chest pain he gets as part of growing so fast.  He thinks Advair might help his wheezing.  I think he might be right, actually.

Or maybe there's someone out there who will just start kicking my ass and Owen's ass so that we'll do the things that we need to do.