it's been awhile since i shared a progress report on the building project. here's what's going on right NOW, as we "speak:" 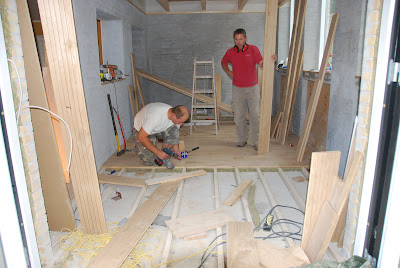 the floor in the new dining room is 2/3 finished.
they declared that they didn't want any lunch 'til it was done,
but have just changed their minds. 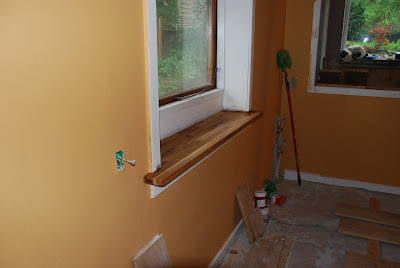 walls in the kitchen are painted (similar yellow to what they were)
oak window ledges went in yesterday. 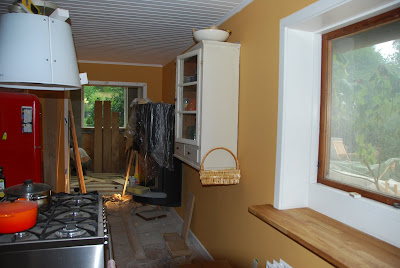 the window sill near the stove is a bit wider so i can set the olive oil over there.
the glass cupboard has been moved over to this side. 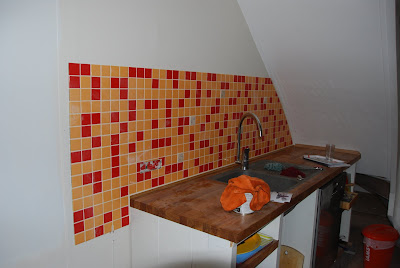 and the backsplash tiles went in on tuesday.
soon i can settle everything into place in the kitchen.
we SHALL be done in time to party.
or at least done enough.
Posted by julochka at 1:16 PM 1 comment:

it's that time. back-to-school time. since we are apparently NOT among the resource-stærke forældre, we didn't know what time school started yesterday (and the website did NOT say either), so we showed up at 8:10, the usual time. but that was too early. school didn't start 'til 9. so, we dropped sabin at the SFO and husband went to a meeting and i came home. then, i biked over at 9 to be there with her when she went in. by then, she didn't need me or really want me there. big second graders don't need their moms to show them the way. 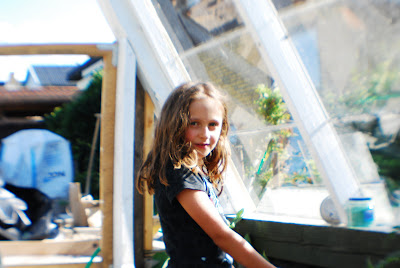 i stood with a cluster of other parents in the doorway while all of the kids in turn told what they did during their summer holiday. the boys were out of their minds raising their hands to tell, but all of the girls in the class had much more dignity about it. it was like watching dogs and cats, the boys eager as puppies with tails wagging and tongues hanging out, the girls, like cats, cool and collected, calmly grooming themselves 'til it was their turn.

when sabin finally spoke up, in a surprisingly quiet voice that was quite unlike one i knew she possessed, she said she'd be to the US. when asked what she did, she said she pet the kittens at her grandma's house and that one had a broken leg and it wasn't really ok. the teacher (a former stewardess, who rules the class with an iron fist cloaked in a velvet glove) managed to drag owen and finn's names out of her, but that was about it.

i guess she didn't want anyone quoting her.
p.s. used my lensbaby to take this picture. LOVE the soft effect on the edges.
Posted by julochka at 11:59 AM No comments:

i've been moving old CDs of pix over into iPhoto to prepare for the party and i came across these of our little monkeys from christmas 2004. 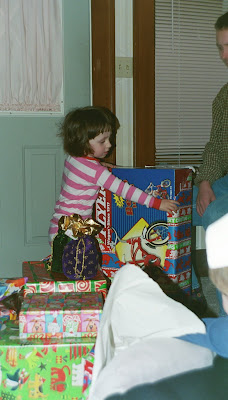 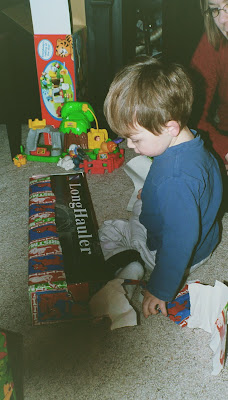 owen gets a huge truck! 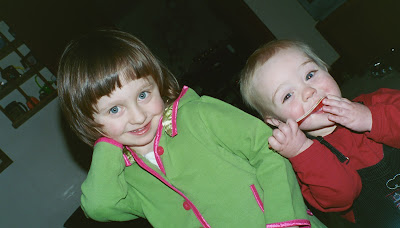 sabin and finn ham it up for the camera.
apparently we didn't get finnie any prezzies that year
because i didn't have one of him opening one.
poor boy, it's tough to be the little one. 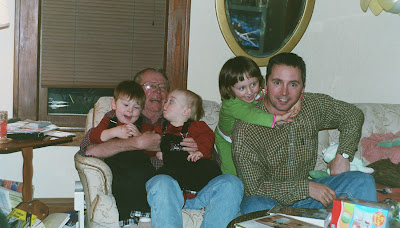 who are these kids and why are they calling me "grandpa?"
Posted by julochka at 11:36 AM No comments:

because i utterly lack any inspiration due to having stayed up very, very late attending a wedding yesterday (08.08.08) and because i have run around doing errands all day and because it's been almost a week since ANYONE has posted on this blog, i thought i'd do a little meme i just came across on woman on the verge. i will in no way be as funny as gwen was, but here you go:
1.  what is your favorite quotable line from a movie?
"i'm goin' crazy up here on the lake." - fargo
"have fun storming the castle." - the princess bride
"he was just funny lookin' in kind of a general sorta way." - fargo
"it's good to be the king." - history of the world, part 1
"it was abby something....abby normal." - young frankenstein
i think it was supposed to be one quote, but there you have it, i'm already violating the meme. (and what does that word mean anyway?)
2.  who's the most famous person you've talked to?
although i used to frequently go to the movies with charles barkley when i lived in phoenix, i never really talked to him, since you don't really talk during a movie, right?
so, i guess it must be crown princess mary of denmark. before she became the crown princess, of course and was just some australian chick who worked at microsoft so she could get a work permit to stay in the country.
3.  how many boxes or bags of chips are consumed in your household per month?
maybe like one if we're having people over, and what is up with this question anyway? this is a pretty random meme.
4.  what foreign dish do you prepare from scratch and serve?
pretty much any dish i prepare is foreign in some sense, since i am a foreigner living outside my home country. and when i go "home" and prepare danish dishes, they're foreign there. and since most of my cookbooks come from the UK, you might say that all the food in them is "foreign" in some sense too. so who can imagine what was really meant by this question? i suppose i could safely say sushi, which i have made a couple of times, but don't do very often.
5.  what is your favorite section at the supermarket?
the produce section in føtex
the fun/special item section at irma (by this i mean where they have interesting flavored vinegar and such)
all of trader joe's when i get a chance to visit one.
all of whole foods when i get a chance to visit one.
the tea section in sainsbury's when i'm in london.
the last question of this meme is too stupid to do, so i'm leaving it out.
ok, sis, i expect you do this one too. :-)
Posted by julochka at 6:00 PM 1 comment:

Email ThisBlogThis!Share to TwitterShare to FacebookShare to Pinterest
Labels: lack of inspiration, meme

i made a fantastic steak fajita salad for lunch this afternoon and we were so hungry i neglected to photograph it. how totally unlike me! it's one of those dishes that are my favorite of late in that i make it in a large bowl and stick in 3 forks and we all eat out of the serving dish. it therefore saves on dishes.
here's what you do:
2 onions, halved and sliced (you could leave them as rings if you feel like it)
2 medium portabellos, sliced
1 medium zucchini, sliced
good sprinkle of fiesta fajita seasoning
sauté together, just like you were doing fajitas. you could also use peppers like you do for fajitas, i just happened not to have any, so i used what was in my box.
in a grill pan, sear one flank steak that you've seasoned with the fiesta fajita seasoning. i bought a veal one, which was totally tender and fabulous--they can sometimes be a bit tough. you could also use chicken if you'd rather or shrimp or just leave it vegetarian.
head of lettuce (whatever you have will do, or one of those bags of yummy leaves, i used the head of lettuce that was in my box), washed and chopped into bite-size pieces.
1 leftover corn on the cob, cut off the cob
3 plump summer tomatoes
a good cup of diced watermelon
settled all of this salad stuff into the bottom of my big square fish dish (the one we usually kept the old bananas in while you were here), leaving a well in the middle for the warm stuff.
i whipped up a ranch dressing w/creme fraiche and the fajita salt, but you could just buy some and use it.
when the veggies are sautéed, but not too done, fill them into the well you've left in the middle of the salad, then slice your flank steak into bite-size pieces and sprinkle it over the top of the whole thing. drizzle with ranch and serve with warmed tortillas.
it was a fantastic salad for a summer afternoon. i really wish i'd taken a picture before we devoured it.
Posted by julochka at 6:36 PM No comments:

for a couple of days sabin has had a slightly touchy tummy. not sure if it's a touch of the flu or if it's just that time of year when you eat too many cherries and strawberries, too much melon and perhaps a few too many peaches and nectarines. anyway, this morning, she looked up from her mario and said, "mom, will you make me some scrumbled eggs?" she said she ate them at aunt monica's.
so, what could i do but trot downstairs and stir her up a batch of nice, fluffy scrumbled eggs? and you know what? they perked her right up.
Posted by julochka at 3:32 PM 2 comments: