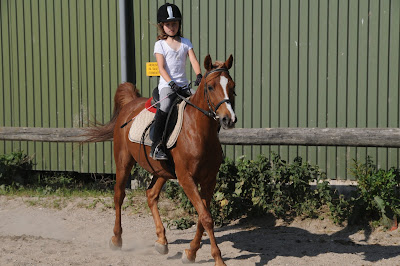 last lesson of the season 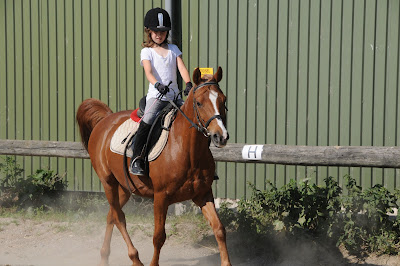 today was the last riding lesson of the season. and although the day was beautiful, it was a little bit of a letdown. the teacher was late and the saddle room was locked, so we couldn't saddle up 'til after 9, which was when it was supposed to start. then, ten minutes into the 40-minute lesson, the teacher mounts an irish cob, saddled with one of those bareback "saddles," which is really just a fuzzy pad without stirrups. they set off through the barnyard and tinka, the irish cobb, shied and dumped the big ole teacher right off on the ground. she was wearing a helmet, but managed to totally over-dramatize her fall and refuse to move, crying back injury, sending her half-hysterical daughter running for the owner and a big crowd gathering, all while three little inexperienced lesson girls looked on in horror.
so, instead of riding out on a little tour, they went back to the arena where the shaken daughter had them trot around a bit. they didn't even get to canter, which was quite disappointing to sabin who is getting pretty good at it. she only got about 20 minutes of her 40-minute lesson and was really quite disappointed in the end.
oh, and just as we had suspected, the teacher was completely fine. she was just a drama queen. which i think was a pretty bad example for the kids.
lessons start again aug. 1 and we're already looking forward to that.
Posted by julochka at 10:21 PM 1 comment:

Email ThisBlogThis!Share to TwitterShare to FacebookShare to Pinterest
Labels: horses, milton is growing on me he's quite a cute horse, riding, sabin
Location: Denmark 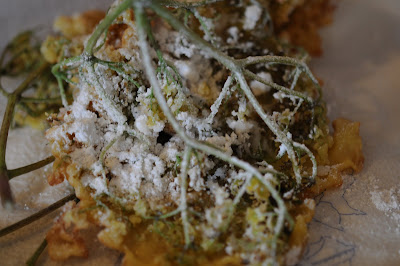 fried hyldeblomst
3/4 C flour
1/2 C sugar
1/2 C milk
3 eggs
a dash of vanilla
mix together into a pancake-like batter
pluck hyldeblomst (elderflowers--i wonder if these aren't what we called chokecherries when i was a kid), shake off all bugs and any loose bits (but don't rinse, that wrecks them). heat up about an inch of oil a frying pan. when it's hot enough, hold the stem and dip the flower head in the batter. fry them in the oil 'til golden brown.  dust with powdered sugar and enjoy. we ate the flowery bits and left the stem, it makes a good handle for eating the flowery bits tho'. and it tastes of pure summer.
Posted by julochka at 11:39 AM No comments:

Email ThisBlogThis!Share to TwitterShare to FacebookShare to Pinterest
Labels: i should probably write a cookbook, recipe
Location: Denmark

i invented a mean gazpacho last evening with bits & pieces we had around here. and it's the best thing for hot weather. you'll have to make everyone in your vicinity eat it too, because it's really garlicky, but worth it.


gazpacho
5-6 largish-tomatoes - peeled and cut into quarters
1 cucumber - peeled and cut into chunks
1 fat clove of garlic
whiz it all up in the blender with a good glug of white wine (yes, i put white wine in everything).
add:
2 TB of soy sauce (i have a great one from the Philippines that has lime in it too--Toyomansi it's called)
1 TB pomegranate sirup
3 TB good olive oil
you could include a red pepper and an onion if you'd like, but i didn't in this batch and it's really good. put it in a jar in the fridge to chill, tho' you could throw some ice cubes in when you blitz and if your tomatoes and cuke were cold,  you'd be good to go eating it right away. totally refreshing and delicious.
Posted by julochka at 11:31 AM No comments:

Email ThisBlogThis!Share to TwitterShare to FacebookShare to Pinterest
Labels: i should probably write a cookbook, recipe
Location: Denmark

today was sabin's first lesson in the 40-minute batch on sundays. it's a different teacher with a totally different style, far more focused on getting the kids ready to go to a horse show--there's one at the stables at the end of the month and sabin seems interested in entering a class where you they've laid out poles on the ground, jump-style and you have to follow the numbers in the correct order and ride through it at the trot. they practiced this today with quite a complex pattern and i think sabin just might be interested in giving it a whirl at the end of the month. i guess we'll need a hunt coat! 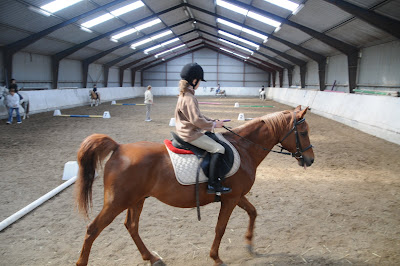 milton's tongue is hanging out
they've changed milton's saddle since we last rode and i do think it's a youth size, tho' i had no measuring instruments with me.  here's a shot of sabin holding it, if that helps a bit (she wasn't holding very still and my ISO was set too low, so it's a bit blurry). 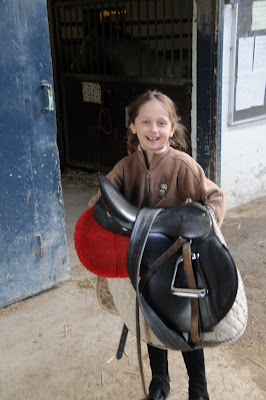 sabin's doing very well. this group seems to be well-suited to her, tho' they've been riding for longer than she has. she just seems to be a natural. yesterday, when far asked about whether she could come another day, the teacher (same as today's teacher because sabin's regular one was sick) said she could come on sunday morning for 40 minutes or for 30, but she recommended 40, because she was too good for the 30-minute sessions. that made sabin do her little shy smile and that little snort she does when she's proud, but slightly embarrassed. 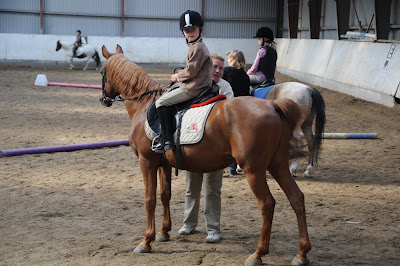 other kids are all scared and whining and falling off left and right and she just sits up straight and gives milton a kick and gets him out on the rail. she did manage to leave her gloves in the car yesterday and far is gone with the car, so she didn't have them today and missed them a lot. it's a bit hard on your hands holding the reins. 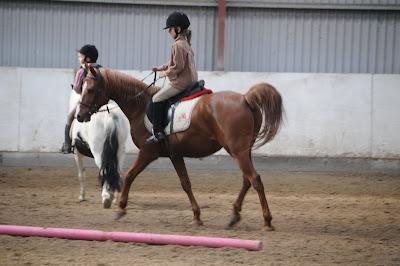 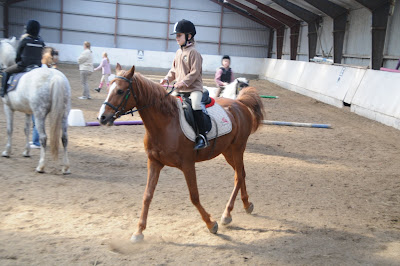 i wonder how grandma kate would have scored...
Posted by julochka at 9:54 PM 1 comment:

Email ThisBlogThis!Share to TwitterShare to FacebookShare to Pinterest
Labels: good thing i wasn't a housewife in the 30s
Location: Denmark

note to the cat

please do not bring a mouse into the house. 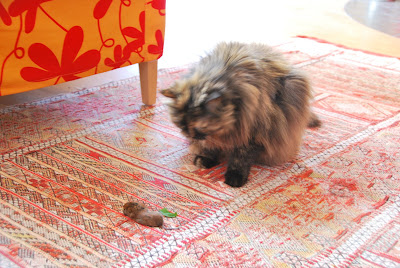 especially not if they are only stunned and/or pretending to be dead. 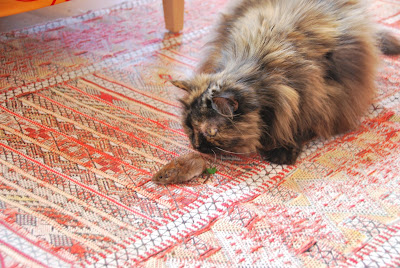 and then please refrain from giving the mouse a little encouragement with your paw, which causes it to run off behind a box where no one can get to it and then run outside yourself due to the high-pitched screams of the child. because that's not good and it takes far a long time to get home. 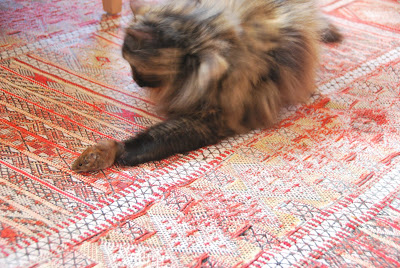 Posted by julochka at 8:08 AM No comments:

Email ThisBlogThis!Share to TwitterShare to FacebookShare to Pinterest
Labels: bad kitty, good kitty, why does the cat think we want mice in the house
Location: Denmark

climate change is definitely upon us. it's been windy and cloudy and blustery and rainy for two days after a glorious weekend last weekend, but this morning we awoke to this: 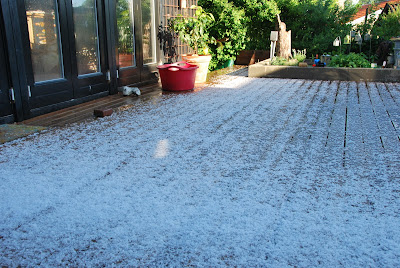 the terrace was covered in hail! i've never seen more than a couple of wussy little hailstones in this country, but this we could have shoveled. 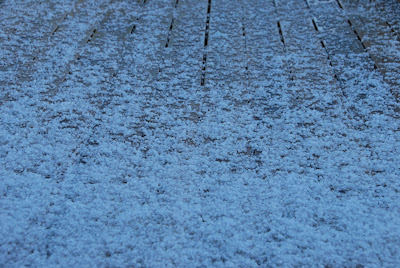 it didn't seem to have damaged the garden tho', and the greenhouse is intact. so that's good.
Posted by julochka at 8:01 AM No comments: