this autumn, sabin chose to go to something called "mini-konfirmand" at the church next to her school. she had so much fun doing that every wednesday afternoon that she signed up to be part of the nativity play that they were going to put on at the church. last thursday afternoon, there was a matinee of the play at the church. then, today, sunday, they performed again during regular church services. here are some scenes from both...the pictures aren't my best work, as i didn't want to use flash - both because i was so far away it wouldn't make a difference and well, i hate flash. 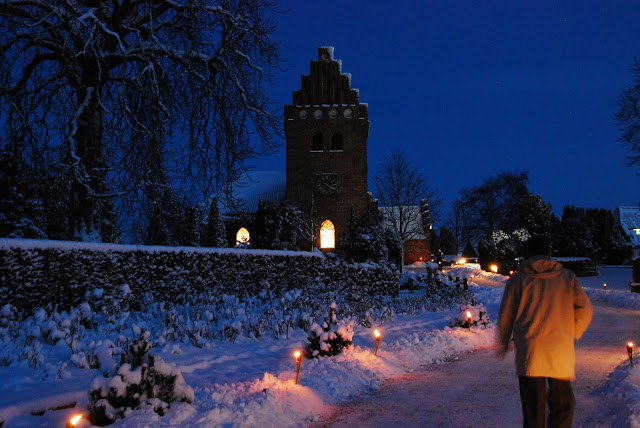 the church as we approached on thursday at 4 p.m.

it was so beautiful with all of the lights.

and you have to bear in mind that the sun had been set for half an hour by then. 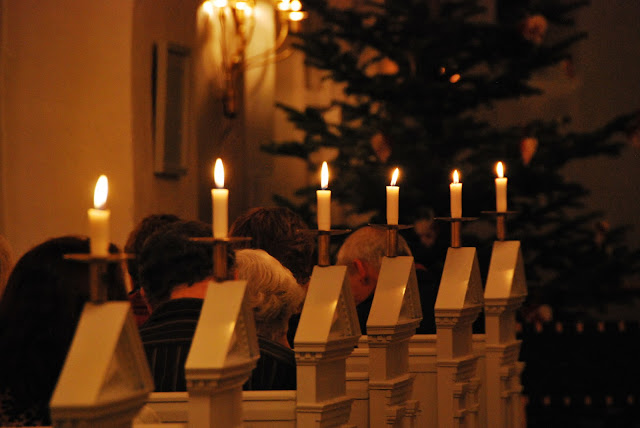 a view inside the church. 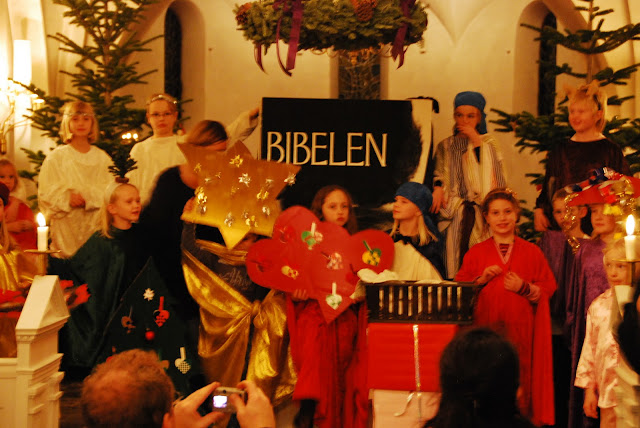 it's a nativity that tries to explain the meaning of christmas

for a contemporary audience. 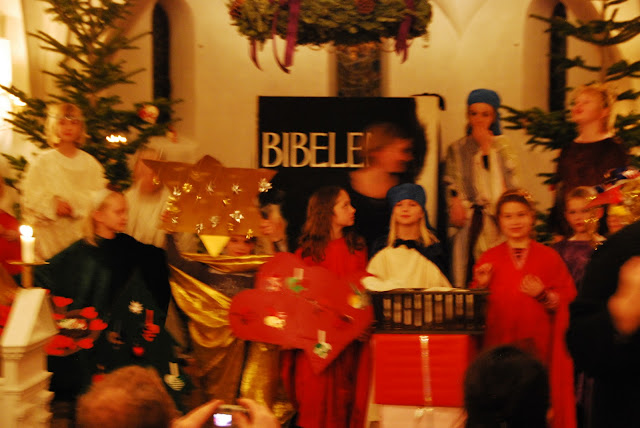 it was difficult to capture everyone standing still. 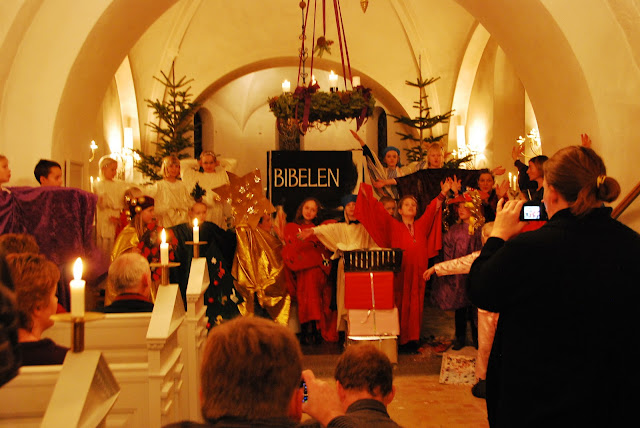 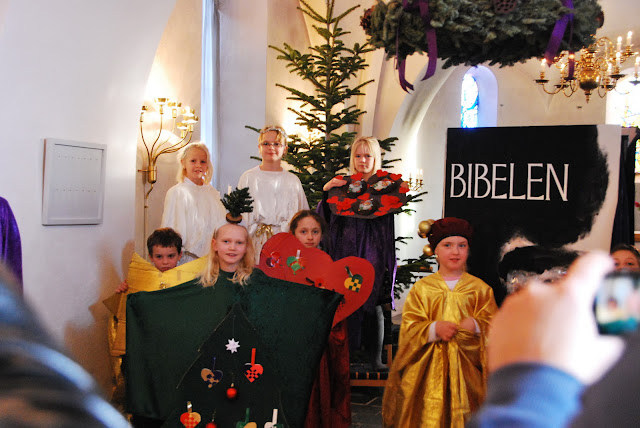 a little glazed over from the photo session at the end. 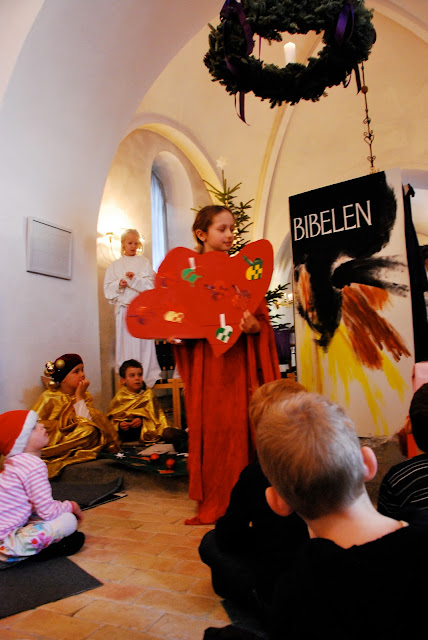 a quick shot captured by karoline during the play.

and a couple of gratituous horse shots

from the last weekend of riding lessons 'til january. 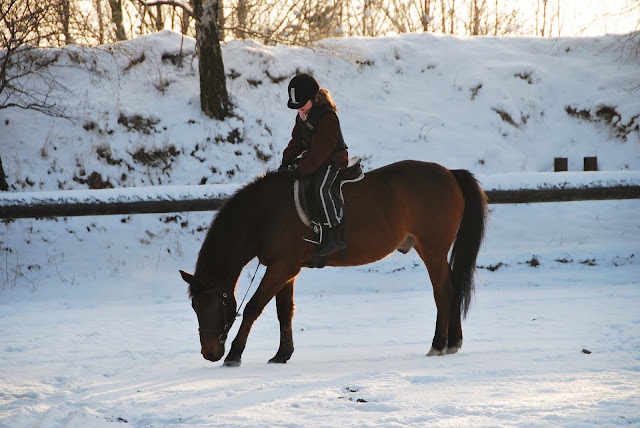 they're her main christmas present, but she got to open them early.

it was THAT cold. 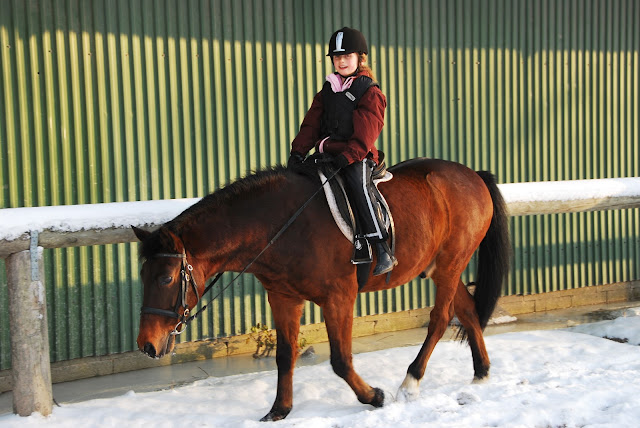 she loves zidan at the moment.

she really clicks with him. 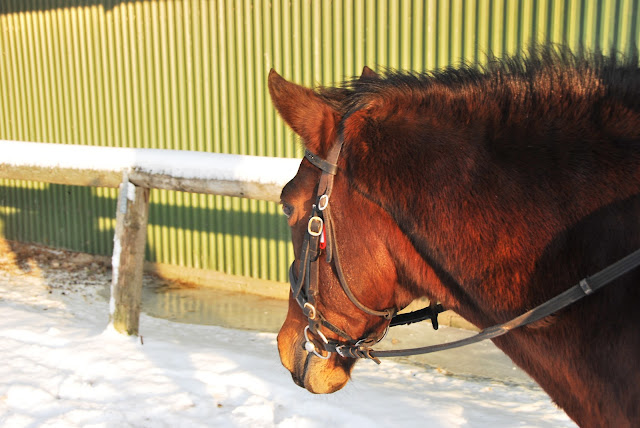 his fuzzy ears make him look like a teddy bear. 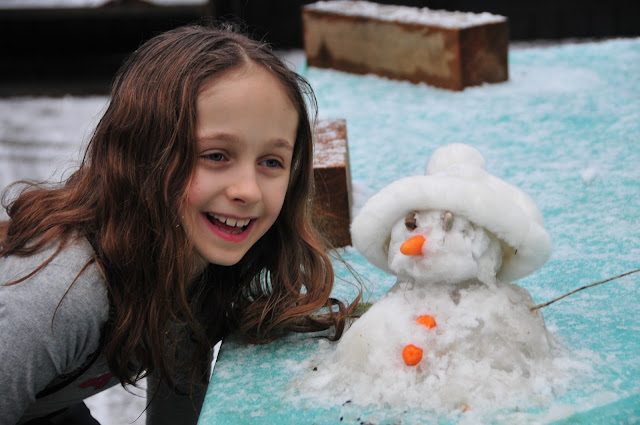 christmas party at the riding school

on saturday, we got a taste of exactly how many students go to sabin's riding school! and it's a lot! we went for our regular lesson in the morning and the sun was shining on a fine, winter day. sabin rode zidan, who is her current favorite. he's the one that's a little character and likes to hold the whip in his mouth while i help sabin get on. he's exactly the kind of horse we need to get for her when the time comes. in fact, i think we'll even probably try to buy him. 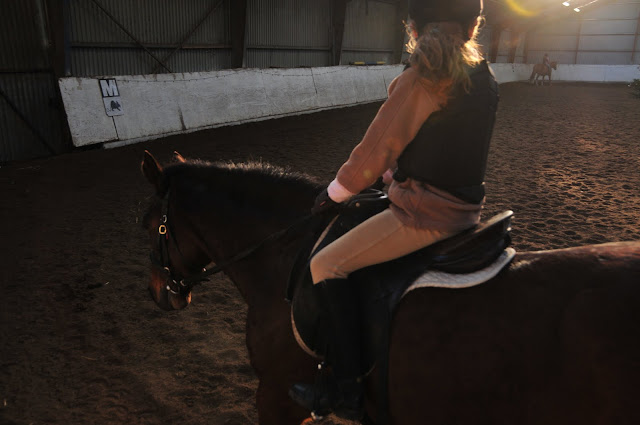 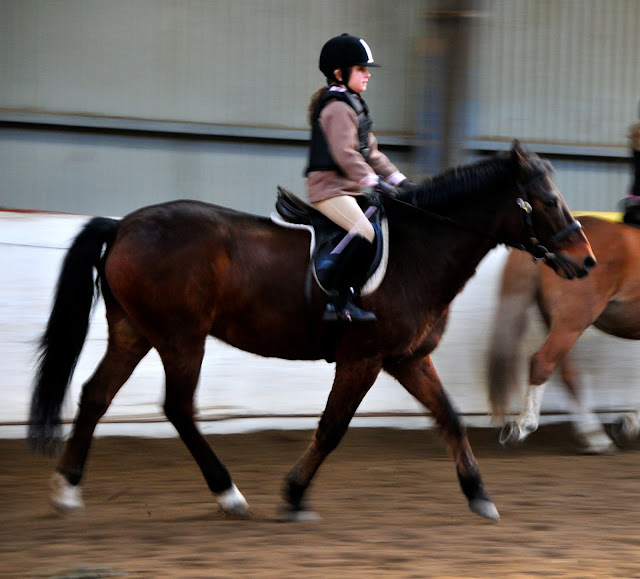 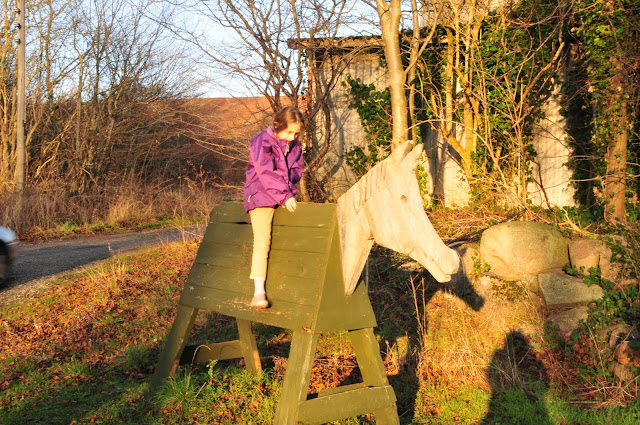 then, it was time to go back to the christmas party at the riding school. sabin was part of the st. lucia group. they wore white sheets tied with silver garlands and decorated their riding helmets with silver garlands as well and carried a candle. we all walked into the riding hall in the dark, just by the glow of the candles, singing the st. lucia song. it was so much fun! after that, there were æbleskiver and mulled wine (gløgg) and santa came and handed out candy. 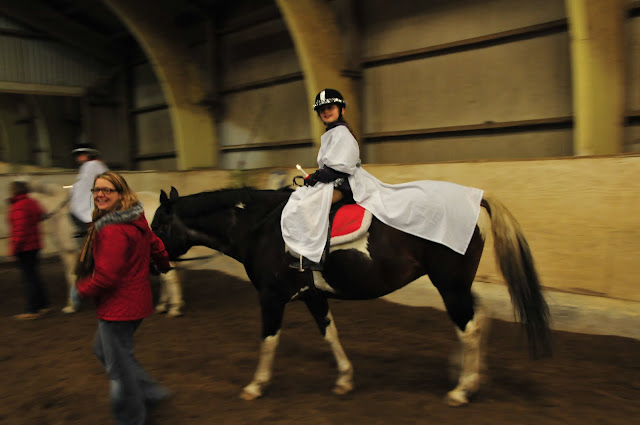 again, it's so hard to get good pictures in the dark. 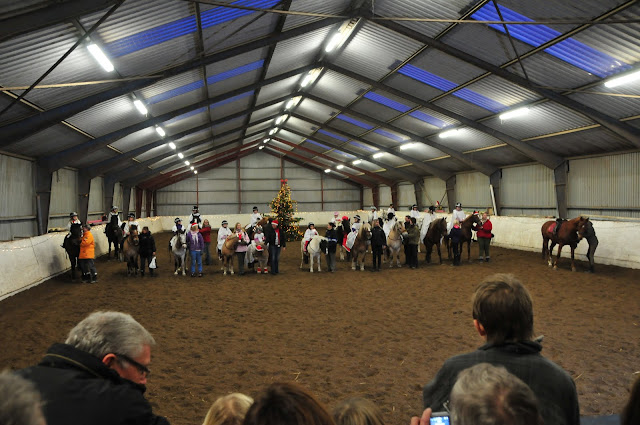 here you can see the whole group and the christmas tree in the arena!

it was so much fun, it really put us in the christmas spirit.

Posted by julochka at 8:54 PM No comments:

Email ThisBlogThis!Share to TwitterShare to FacebookShare to Pinterest
Labels: horses, more blurry pictures because the light is crap, sabin, the kid looks good on a horse
Location: Denmark

this is the second week sabin has ridden her.

she has a bad habit of pulling the bit away and almost jerking sabin right off over her head.

she hasn't succeeded tho'. 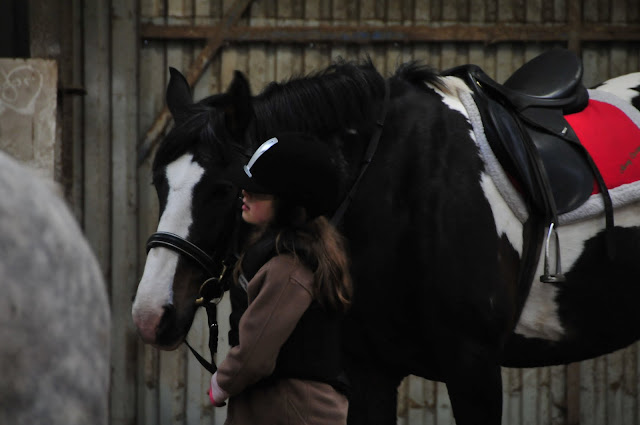 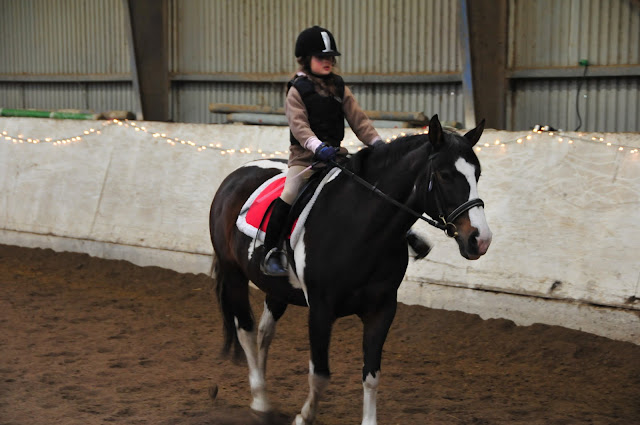 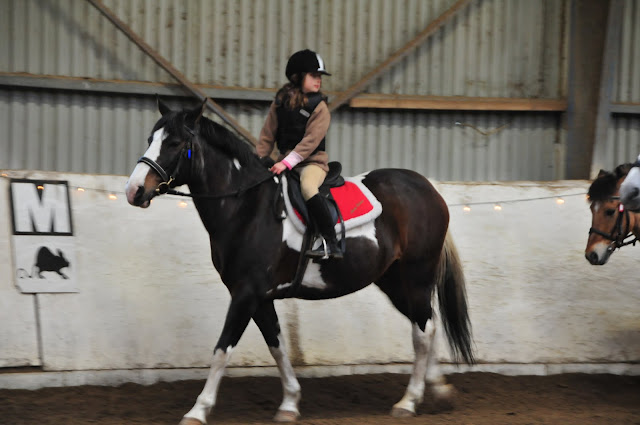 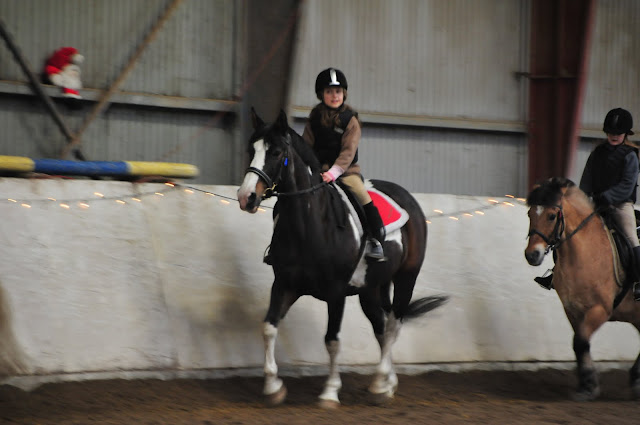 Posted by julochka at 9:22 AM No comments: