Unfinished Projects, I Will Defeat You!

Disgusted with my inability to complete tasks that require multiple steps, I recently embarked on a quest to finish some projects. Shortly after turning my attention to these things, I got distracted by some phone calls I needed to make, a few meal preparations, several baseball games and some music that I needed to download. Then, I finally picked up this project I started late last year. Now keep in mind, I'm only half finished. This is going to be the inside and unexposed layer of a double-layer hat. And though I should be some sort of knitting expert by now, the hat looks like it was dragged to another continent in the bottom of a suitcase and wound up and tangled hopelessly in its own ball of yarn. Oh wait, it was. 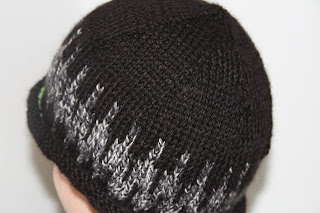 I feel a sense of victory on this one, because it's the first time I've used two colors. The black yarn is a lucious undyed baby alpaca, almost too soft to work with. And this method of decreasing (or making the round part of the hat that closes up the top) is one I've never done before. I found it quite confusing, but am confident that the other side of this hat will look better. I'm going to knit in the same pattern, with the colors inversed. Now, if I need to figure out how to pick up the live stitches from my provisional cast-on. 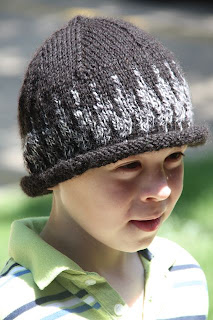 When I'm finished, the edge won't curl up like a women's hat. And it'll be too big for Owen.
Posted by Monica at 7:39 PM

great pix!. why does it have to be double sided? isn't it kinda done now? it looks great!