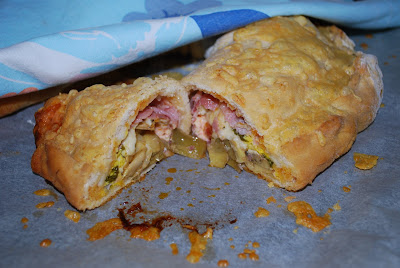 stuffed bread
1 pkg. yeast
1 T honey
1 C warm water
1 glug (T+) olive oil
Mix together and let it stand for 5 minutes until the yeast starts to bubble up a bit.
Add:
2+ C organic flour (italian tipo 00 is best for bread)
1 tsp. salt
I say 2+ cups of flour, because you have to add enough so that it's dough consistency and this can vary by the barometric pressure/humidity of the day. Sometimes it takes less than 2C and sometimes nearly 3, I don't know why, but it's a fact.
Let it rise 'til it triples in size. Turn it out on the countertop and knead it a bit, then roll it into a loaf as if you were going to make a baguette, then use a rolling pin to flatten and stretch it 'til it's about 2' long and 8+" wide. then arrange the toppings in the middle, leaving enough dough on both sides so you can close it around the fillings and crimp the edges together.
filling:
5-6 slices parma ham
3-4 medium chorizo sausages, separated into bit-size bits (buy the soft kind that you can take out of their skin, not the hard kind) (any other sausage will work as well--just so it's a kind you can take out of its skin and it's soft and you can pull it apart into little bite-sized pieces)
½ jar of grilled artichokes in oil
1+ C grated prima donna (or other salty) cheese
1+ C grated organic maasdamer cheese
3 eggs--these i placed evenly along the toppings, then smashed them and spread them across, it also helped seal the edges of the bread.
close the bread by bringing the edges together and rolling it shut. it usually ends up a horseshoe shape because it's too big to fit in the oven otherwise--your oven being bigger, you may be able to just leave it long. sabin grated a bunch of extra cheese because she thought it was fun and i sprinkled that on top. that was delicious!
bake 30-ish minutes at 350°F/175°C or until it looks golden and done.
we ate this for dinner, piping hot out of the oven. served with a yummy salad, it's a perfect meal in itself.
you can substitute other cheeses--i'd just advise using 2 kinds because it tastes more interesting that way. you can also use bacon rather than parma ham. and any other kind of sausage. it's really up to you how you want to stuff it. i've made this many times with many different fillings, but this is probably the best one i've ever made.
enjoy!
Posted by julochka at 11:41 AM

The weather has turned dark and cold today after a shot of summer yesterday. Finn and I will head out now to gather ingredients for this wonderful bread. Any extra advice for extreme humidity?

how's it going with the bread?

so, how did it turn out? why haven't you posted a picture here?

It's because I went out and bought all the ingredients and then didn't make it that day. Today, however, I'm planning to make it finally.