a bit out of sequence

these pix are a bit out of sequence, but i only downloaded them from the camera today. they're the pix taken at the airport before sabin's flight to chicago last thursday. 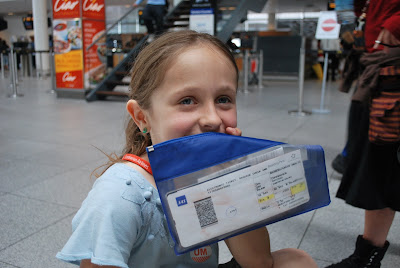 all ready to go with her important papers in the pocket around her neck.
she was pretty proud of this! 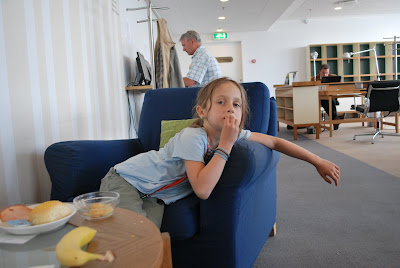 relaxing and enjoying a snack in the gold lounge before departure
as you can see, she's pretty at home there.
she had no qualms at all about the long flight ahead of her. as the time drew closer, however, her mother got more and more nervous. i was rather upset in the end because i was getting mixed messages from various SAS employees who were busily trying to get people to accept a bump from an overbooked flight. i was concerned that i hadn't met the SAS employee who would follow sabin and help her on the flight. in the end, however, we met the very nice stewardess who took sabin on the plane as nearly the last passenger. and the rest, as it were, is history...
Posted by julochka at 3:59 PM