Lego, Chlorine and 20 hours with no sleep! 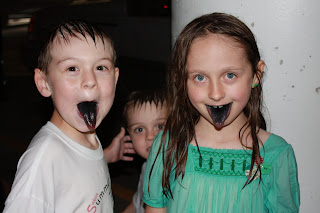 The eagle has landed.

Our Sabin arrived on time last night at Terminal 5 of Chicago's O'Hare airport. She was totally bleary-eyed and complained of no sleep during the flight. Nonetheless, we rushed into our bathing suits upon arrival back at the hotel and went for a little splash before starvation set in. We ordered some pizza to the room and after that was devoured, we put together some Lego. The Indiana "Yones" sets have gone over extremely well. Sabin is an expert at following the directions and she's a little dismayed as to the disorganized approach the boys take. You'll remember, of course, that Husband had to help put together the big Lego container ship projects of last year. My boys throw away the directions first and cut open all the bags.

Day Two began with more swimming. Finny and I worked Legos while the big kids jumped in the deep end with their floaties again and again. We then packed things up and attended a buffet breakfast in the hotel. Sabin ate a huge pile of scrambled eggs and Finn ate many sausages. Owen ate everyone's French toast and the waitress admired my tribe and asked our story. After breakfast, we checked out of the hotel and drove into the city. We parked near Navy Pier and went to the children's museum there. That was pretty good, and then we left to find some cold treats. You can see by the picture that the big kids ate slushes with a ton of food coloring. After the slushes, everyone played in the water fountain outside of Navy Pier (the reason everyone in the picture is sopping wet.)

At 4pm on Friday, we joined the Eisenhower Expressway only to have a potty emergency. If you know anything about downtown Chicago, you know that there are no bathroom opportunities there. I pulled over at a place selling cell phones and snacks and begged them to use their not-for-public restroom. They obliged and I bought some things from them with gushing thanks. We got back in the car and everyone but the driver fell fast asleep.

4 & a half hours later, we're in Cedar Rapids. Instead of Sabin adjusting to our time zone, my boys are now staying up extremely late to meet her in the middle. There are cries now of hunger, so I must wrap up and find a proper late night snack.
Posted by Monica at 5:45 AM

glad to see and hear that fun is being had. :-) tho' i don't really wanna think about which toxic E-chemicals were in those slushes to give their tongues that color!

Plan is to find many more E-chemicals and feed them to our children.

It must be important as it inspired YOU to use your shift key to make a capital letter...

just read the ingredient list on anything red or that unnatural shade of blue. all of the colorings start with "E"